Highland, Illinois is one of the oldest Swiss settlements in the United States. It was founded in 1831 by Swiss pioneers from Sursee, Switzerland. Led by Dr. Kasper Küepfli, the party formed the settlement of New Switzerland on October 14, 1831. The town received its name in 1836 after the Highlands of Scotland in honor of General Joseph Semple. First, it was named Helvetia in accordance with the heritage, but later the town voted to change its name to the English version-Highland. The town was formally platted in 1837. 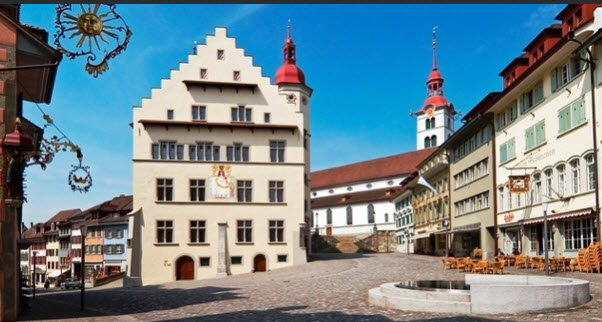 Highland has shared the title of “Sister City” with the town of Sursee, Switzerland, since 1976. Located 35 miles east of St. Louis just off of Interstate 70, today Highland is home to 9,830. A progressing community, Highland also honors its historical roots with several celebrations and festivals that recall the Swiss and German heritage.
One of Highland’s early citizens, Louis A. Latzer, was the man who perfected the process of condensing milk, thus making milk more widely available to the masses. He is called the “Father of Pet Milk”. This is just one example of the long-standing entrepreneurship that has been prevalent in Highland since its inception. Many of Highland’s most prosperous industries were founded by local citizens, often growing their operation from garage or basement to multimillion dollar corporations. Currently, Highland is home to many worldwide trade industries, such as the Basler Electric Co., Cooper B-Line Inc., Wicks

Many smaller businesses also call Highland, Illinois home, offering a diversity of products and services usually only found in larger cit
ies. Highland has a long history of being a progressive municipality, successfully blending industry within a small town atmosphere. There are more than thirty social/service organization in Highland, each with an active membership.

Additionally, Highland is proud to be home to a highly rated school district, library, and hospital. City utilities are municipally owned and operated and include the electrical system, water and sewer systems, and most recently, the Highland Communication Services for municipally owned and operated fiber broadband internet, telephone, and data services.